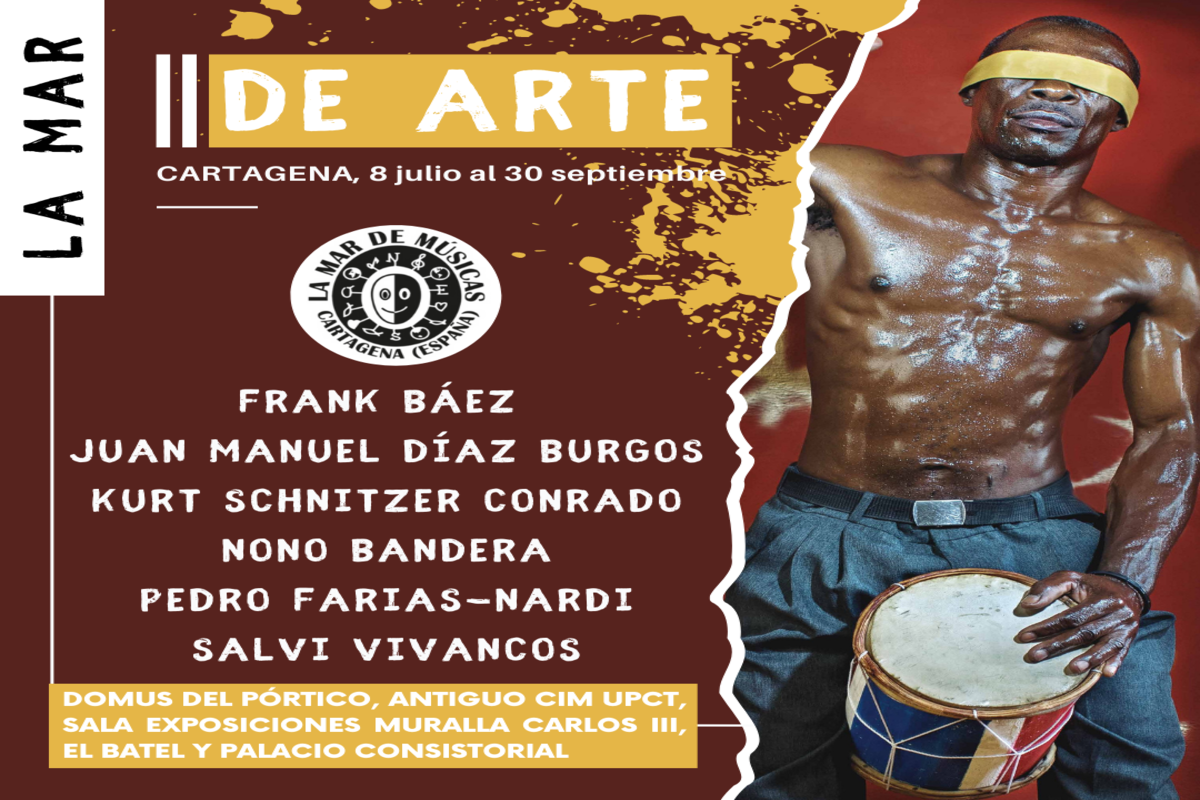 La Mar de Arte schedules six exhibitions with free access for all audiences from July 8 to September 30 . Through them you can take a trip through the cultural and natural wealth of the Dominican Republic, turning the visit through the different rooms into a tour of the Caribbean country.

Art emerges from literature showing a fusion of Dominican and Spanish talent in La Mar de Músicas. From the book 'The Marilyn Monroe of Santo Domingo', written by the Caribbean Frank Báez, comes the plot of this exhibition made in tandem with the images of Nono Bandera from Malaga. The photographs are extended chronologically without losing their identity, illustrating the message of this book of poetry that describes a woman "who drinks coffee at stops, the macho man, the fortune teller, the megapoet, the one who cries at the end of the film without Nobody hugs her."

The Cartagena photographer Juan Manuel Díaz Burgos puts together a project around the passion of some people for music, and specifically the SON. The exhibition focuses on the capital of the Dominican Republic, Santo Domingo, and specifically on the 'hot' neighborhood of Villa Consuelo, where the place where the 'Club Amigos del SON' organizes its meetings is located.
The spectacle captured by Díaz Burgos's camera is wrapped in a poor blue light coming from neon tubes. What gave intimacy to the place full of small tables and stools, in order to make better use of the tiny space of this room where music is the protagonist. The rest was taken up by the excellent rum and beer served.
This is the first color work that this renowned photographer did in digital format with a simple little camera of just eight megabytes. Born in 1951, Díaz Burgos is an author with a clear vocation for humanistic, documentary and essay photography. His work has been exhibited in many countries.

This exhibition of images is the result of the research work that the Cartagena photographer Juan Manuel Díaz Burgos carried out in the city of Santo Domingo (Dominican Republic). In 2002 he learned of the existence of a fund that houses the General Archive of the Nation. From there he rescues all the negatives of the Austrian Kurt Snhnitzer (a) "CONRADO" made from 1939 to 1943. This Jew, a doctor by profession, immortalized his years of Caribbean exile with his camera. His photographs portray what Ciudad Trujillo was like, the current Santo Domingo. Reflecting a village-city with the vestiges of an old Spanish colony rooted in the old quarter of its walled area; some peripheral neighborhoods with many of their streets unpaved, lacking public lighting, boarding houses sweetened as "hotels", wooden tenement houses roofed with zinc,

The photographic essay by the Dominican Pedro Farias-Nardi deals with the things that are there, simple, palpable and everyday, that differentiate us and inform us about the condition of that other: Haiti. With this he achieves this by following an ice reseller, Mr. Fallace Tati and his nephew Jean, seeking to unravel the fetishism of merchandise. They cross the border early in the morning, towards the Beller ice factory, in Dajabón, Dominican Republic. At the border, he awaits the opening at eight in the morning, portraying an avalanche of people towards the Dominican Republic through the bridge over the Masacre River that divides both countries, full of history and corpses. This essay is the result of the observation and perception of the border market, which he has been photographing for years. Thus, he makes a photographic account of a simple product, essential; which in the Dominican Republic is taken for granted: drink something cold. Farias-Nardi describes this as a cold metaphor, forgive the redundancy, of the Haitian reality and what it has implied for Dominican border development.

FLUYE arises from giving truth to the dream of the blurred image of a river, mentally captured when in 1995 the Cartagena photographer Juan Manuel Díaz Burgos was on his way to San Juan de la Maguana, near the border with Haiti. Several more years had to pass, so that in 2009 the photographer had the opportunity to make a portrait of two Haitian brothers in a riverbed, so that he would understand that with that photo he was possibly paying off an outstanding debt. For Díaz Burgos, that image acted as an accomplice in his interest in knowing and interpreting how the Dominican interacts within his environment, and specifically the river. From 2011 to 2019 the photographer toured the island with one goal, to meet him. And even though his landscapes are spectacular, this is not the objective of his gaze or interest: It is the life that he generates around him, which really interests me. The river as a meeting point with play, work, rest or the redemption of souls.

Salvi Vivancos from Cartagena is an audiovisual artist and art historian, as well as a collector of small-format film in 8mm, Super-8 and 16mm. His creative process is mainly nourished by research into analog photography, memory, the archive, non-narrative cinema and home cinema. The result of this is this exhibition that shows how music and dance are part of the spirit that permeates the people of the Dominican Republic. Thus, he manages to contextualize the rhythms that make up the future of the Caribbean country.